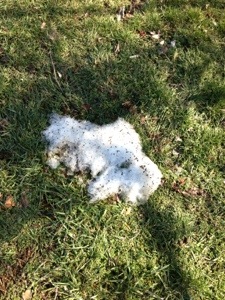 I smelled it this morning.

The vernal aroma swept down off the ridge behind the house and danced across our little creek bed. Pried loose from some early foothold in North Georgia, Spring is making its first foray into the central Appalachian foothills. It’s only early February here, and Winter will undoubtedly beat back Spring’s initial thrust in short order and jolt us back into reality.

But today, for the first time this year, I smelled it. Spring. It’s coming. It may take a few weeks or even another month, but it’s on the way. And there’s nothing Winter can do to stop it.

It’s funny how the changing seasons seem to come first to the nose, then spread ever so subtly to the rest of the senses. I stood on my back patio for a few moments at sunrise this morning, basking in olfactory glory. Watching the day’s first light trying to seep through the massive cloud bank that raced northward from its origins somewhere over the Gulf of Mexico to some frigid destination in the North Atlantic. Listening to the songs of the cardinals, towhees and those few brave robins who winter over in the Ohio Valley rather than retreat southward with their less-hardy cousins. Feeling the warm fog drifting off the tiny creek out back as it edged its way skyward to join the mist rising off the still-chilly Ohio. Then realizing in an instant that the first sniff of spring air flipped some sort of cosmic sensory switch, allowing me to experience–if only briefly–the fullness of its coming.

And in that moment, enjoying the first few breaths of the season of re-birth, I also experienced the sadness of knowing that it’s not quite here yet. The waiting, really, has just begun. And I found myself…yearning.

Author Rick McKinley says that when God speaks to us, it sounds a lot like our own voice, but it says something we wouldn’t think of on our own. Standing on the patio this morning, in that beautiful and desperate duality of joy and longing, I think I heard it. God’s voice. “This is my Kingdom. Here, but not yet. A taste. The coolest trailer for the most awesome movie ever made. A preview of the greatest story ever told. Enjoy it. Bask in it. Yearn for it.”

OK, so maybe that wasn’t exactly what I heard in the moment, but sometimes God’s words come more like a feeling, don’t they? It’s in the sensing of them that we listen, and it’s in reflection that sometimes we hear them most clearly.

That’s why I don’t think there’s any comparison between the present hard times and the coming good times. The created world itself can hardly wait for what’s coming next. Everything in creation is being more or less held back. God reins it in until both creation and all the creatures are ready and can be released at the same moment into the glorious times ahead. Meanwhile, the joyful anticipation deepens.

All around us we observe a pregnant creation. The difficult times of pain throughout the world are simply birth pangs. But it’s not only around us; it’s within us. The Spirit of God is arousing us within. We’re also feeling the birth pangs. These sterile and barren bodies of ours are yearning for full deliverance. That is why waiting does not diminish us, any more than waiting diminishes a pregnant mother. We are enlarged in the waiting. We, of course, don’t see what is enlarging us. But the longer we wait, the larger we become, and the more joyful our expectancy. (Romans 8:19-25, MSG)

Spring will come, but I’ll embrace today. The joyful anticipation deepens. I am enlarged in the waiting. And there’s nothing Winter can do to stop it.