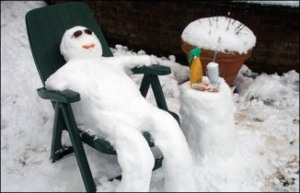 Well, it’s been a bizarre season here in the hills of West Virginia. By the time we hit Groundhog Day most years, we’re complaining about cold, snow, ice & slush, and hoping that French Creek Freddie (our resident meteorological rodent) will predict a quick transition to spring.

This winter, though, has been marked by unusually mild temperatures. We’ve only had a few days of snow showers, and I don’t think we’ve had more than about half an inch of accumulation at any one time. There’s been a little more in the mountains than down here in the Ohio Valley, but even in the high country where there was a 4-foot snowpack last year, there’s only the manmade stuff on the ski slopes. We did have one bad ice storm a few weeks ago, but within 2 days we were back into 50-degree temperatures. On Tuesday of this week it hit 66 here in Williamstown. Six more weeks of this, I could take!

There’s an old saying in these parts though: If you don’t like the weather, wait a minute. That old jet stream could dip any day and give us a blast of arctic air and bring snow all the way down from Canada. The last time I remember a first half of winter this mild, we had two March snowstorms of 18+ inches each.

But for now, we’ll all bask in the warmth of an unusual season…all the while waiting for the other proverbial shoe to drop.

For many people, this is what our faith journey often looks like. Our good old Catholic guilt (even we Protestants have it!) never lets us really enjoy the good times, because we know we deserve so much worse. So we spend our days waiting for our misdeeds to catch up with us, for the sunny skies to end, and for a winter storm to blow in. God can’t just let us be happy. Punishment is bound to be coming.

Unfortunately, that’s a message that the church has allowed to seep into the culture. A message of judgement and condemnation. You only deserve grace if you follow the rules. God is angry at you, and he’s out to get you.

What if the church really lived like it believed Jesus, though? What if we extended the same grace to everyone that he extends to those of us who claim to believe in him?

The weather’s bound to change, but God doesn’t. There’s a love available that will weather the worst storms. It’s the church’s job to spread that love into the world…even to people who don’t agree with us. Not by condemning and scolding, but by serving and sharing.

Personally, I’m just going to sit back, fire up the grill, maybe do a little trout fishing, and enjoy this nice weather. And when it gets bad (and it will), I’m going to ride sleds and build snowmen. Because there’s more to life than changes in the weather. I don’t know about you, but I’m ready for it. Because spring is coming. I trust the promise. I believe it’s true. And I’m going to do my best to live like it.