Say hi to my new little buddy Dima, one of the kids whose mom attends the ministry center.

Even though I’ve only scratched the surface of my experiences during my recent visit to Russia on behalf of Orphan’s Tree, I feel like it’s about time to wrap up my “From Russia with Love” series today with a few of the lasting impressions that have forever altered my perspective.

It sounds almost trite to call this a “life-changing experience.” After all, if we’re honest, nearly every experience is life-changing in some way or another. But for me, these are the things I have learned from this particular experience that have deeply affected my heart and in many ways redirected my spirit:

1. I am the foreigner. Almost everything I saw and heard in Russia was different to me. From the alphabet and the language to the architecture and the culture, there was little to which I could draw comparisons to something familiar.

One night when writing in my journal I caught myself about to pen something about being in a “foreign country.” Then I realized, the country is not foreign. I am. I am bringing my experience, perspective and preconceptions into a place that is simply not the same as that to which I am accustomed (and whose culture, by the way, predates my own by more than a thousand years).

When I accepted my friend Brooke’s invitation to join the team for this trip, one of the reasons I did so was that I recognized a need to break my egocentric American arrogance. I don’t mean that as derisively as it sounds, but the truth is most of us who have never left US soil (and, sadly, many who have) view the world through a very narrow lens. We assume that what is familiar to us is superior to that which is not. And so, mostly subconsciously, we treat people and experiences of other cultures as being somehow inferior.

What I discovered was that when I allowed myself to approach Russian culture from a place of humility rather than superiority, I was able to see it in all its beauty. Yes, much of it was uncomfortably unfamiliar. But had I equated “unfamiliar” with “inferior,” I would have missed literally everything.

The Old Testament prophets leveled pretty sharp criticism on Israel for the way the people treated “outsiders.” And when they were exiled in Babylon, Jeremiah actually encouraged them to adapt and to actively seek peace and prosperity for their captors (Jer. 29:4-9). When we see ourselves as the foreigners, we open ourselves to enriching and transformative experiences.

2. It’s all about the heart. One of the things that’s been popular for some churches in our area in recent years has been shows by “Power Teams,” groups of big-muscled men who tear phone books in half, break concrete blocks, and perform various other feats of strength while proclaiming a gospel message and usually offering some sort of emotionally-infused invitation or altar call at the end.

To be honest, I was never really all that impressed. Now I know why.

Our second morning in Ivanovo, we visited one of the technical schools where many of the orphans from the ministry center attended. There we were introduced to Valeri, who basically served in the role as the gym coach. Valeri clearly was a man’s man. Former military, athletically gifted, hearty laugh, tough as nails. The whole package.

In Valeri’s gym, we saw typical equipment…weights, exercise machines, ropes, etc. But what was not “typical” was the boys he brought out to demonstrate the work he does.

It’s one thing to see big weightlifter types toss around kettle bells, bust up concrete with their bare hands, or take a punch to the gut without flinching. But when you watch a bunch of scrawny 16-year old boys do all those things and more, you see what true strength really is.

Valeri trains not only the bodies of his students, but their minds and hearts as well. His aim is not to create an army of ultra-macho muscleheads. It is to infuse a sense of inner strength and confidence that will allow them to go into the world in whatever profession they choose and excel.

It’s a reminder that the gospel is proclaimed not through what the world views as strength and power, but what it often views as weakness.

(Check out the video below for a brief sample of what Valeri’s students are doing.)

3. Vulnerability is foundational to great relationships. If I can sum up my feelings of being a foreigner in a different culture in one word, it would be vulnerable. Not being able to read directional signs, understand someone’s question, or know what cultural norms are called for in a given situation can be incredibly scary. I learned very quickly that I had to not only rely on our amazing team of interpreters, but also pay attention and try to learn from them. I was completely and utterly vulnerable, and they were literally my lifeline. 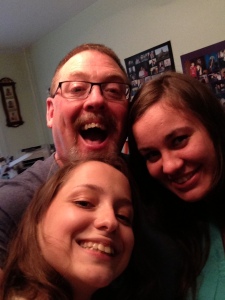 It was out of that vulnerability, though, that I learned something about creating deep, authentic relationships. I can’t remember a time when I have become so close so quickly with any single person or group of people as I did with the gifted young women who served us so well and so selflessly. Even though we only spent a few days together, I can honestly count those with whom I spent the most time–Tanja, Alex and Anya–among my very close, life-long friends.

I think that sense of vulnerability may have also helped forge relationships with some of the students in the ministry center. As you can imagine, when kids have been abandoned by their families to live an institutionalized life, it’s very difficult for them to trust people. If I’d have come in with an attitude of the American hero sweeping in to save them from themselves, I would have been met with cold indifference at best, or, more likely, downright hostility. It was only through a position of vulnerability that I could approach them, and make them comfortable with approaching me.

I wonder if maybe one of the most under-appreciated qualities of Jesus was his vulnerability. I think sometimes we look at his miraculous power over nature, sickness and death, and forget how vulnerable he allowed himself to become in donning the mantle of humanity in the first place, in risking everything to approach the people whom society had utterly marginalized, and in enduring the humility of the cross to give all people resurrection life.

I’m sure this won’t be the end of my writing about my experiences with the beautiful people of Russia, but it is the end of this particular series of blog posts. I hope you’ve enjoyed taking this little journey with me.

To those of you who have followed these entries, I offer you my sincerest gratitude. I have created a new page here on The Awesomeness Conspiracy where all of the articles from this series are included in chronological order. Feel free to read through the entire series, link to it or share it with friends.

I would love to continue this conversation either here in the comment section, on my Facebook page, or, better yet, in person. If you belong to a church, civic group or organization that would like to hear more about my experiences in Russia and/or the work Orphan’s Tree is doing there, please get in touch with me through one of the methods listed on the Contact page.