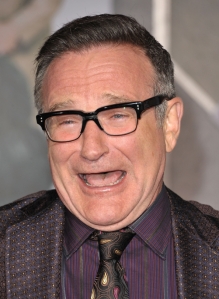 “Funny the way it is, not right or wrong
Somebody’s broken heart become your favorite song”

With much of the world, I am stumbling today through the fog of the reality that Robin Williams is dead.

More than a comedic genius and brilliant entertainer, Williams had that rare gift of bringing to light the depth and breadth of the human experience through his art. He exhibited a sort of radical vulnerability that pierced through the realities we attempt to construct and spoke joy into life in a way few others have managed.

In many ways his was the artistic and prophetic voice of my generation. While we were virtually peeing our pants laughing at his antics, we were often almost simultaneously struck to the core by the truths he revealed about who we are and what our world has become.

It is indeed tragic that it appears the joy he brought to millions escaped him personally. That the masks he helped us strip away from ourselves were ones he was unable to live behind any longer. That the raw depths of pain he used to fuel our laughter would overtake and destroy him.

Beyond just the loss of Williams and his creative force, I also find myself mourning the inescapable reality that so much of what brings us joy and life is borne out of such deep and destructive pain.

All great art requires the artist to lay bare the aches and struggles of life, to expose the powers behind them, and transform them into something transcendent. But the fact that so much of that vulnerability places the artist on a razor’s edge between life and death strikes at something deep within me that makes me question why it is that we seem to have an almost innate need to feed on others’ suffering.

Whether it’s for something as seemingly as flippant as “entertainment” or for the deeper appreciation of what it is that great art of any kind stirs within us, we seem to dwell in this sort of noxious tension between the joy we receive from it—however it is we define that—and the pain in someone else that paradoxically breathes life into it.

My only solace is the sure knowledge that in some mystical, mysterious, inexplicable way, even the harshest torment the world can serve up can be molded into something good and lovely. That art is perhaps the Great Creator’s way of taking what is horrible and revealing something exquisite.

That it is the art that endures beyond the temporal shell of the artist.

And so out of pain and death, life and beauty persist.

Perhaps to show that beneath misery and wretchedness, there is something more true, more splendid and more good that can’t be defeated.

Rest in peace, dear soul. Thank you for your gift. And may the demons that robbed it from you and from us be vanquished in the knowledge that you were able to twist their maleficent schemes into something beautiful.