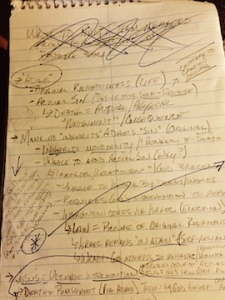 I’ve kicked around explanations and excuses for weeks, and I just have to admit it.

I haven’t gone this long without publishing something here on the blog for almost two years. Even when I was in a dry spell, I was trying to find interesting content to link, or at least pull something out of the archives to re-post.

But since about the end of July, I’ve found precious little time to update my little corner of the interwebs. Wait. Strike that. I’ve had time. I just haven’t been motivated.

I’ve been writing long enough to know that these extended bouts of unproductiveness happen from time to time. But to be honest, this time has been different.

Every time I’ve tried to sit down to write something, I’ve allowed distractions to creep in and steal my attention & focus.

It has been a busy and eventful few months. I got to spend the summer working as a ministry intern at a traditionally African-American church in the heart of one of the whitest cultural areas of the country. I learned and grew a lot during my time there.

About the time that gig was wrapping up, I accepted a part-time job as the director of youth & children’s ministry at another church in my area. I never really saw myself going back into youth ministry, but it seems like a good fit and, even though I’ve only been at it a few weeks, I feel a genuine connection with the students, families and congregation.

I also busted my hump by loading up on extra hours during the summer term so I can finish my master’s degree in December. The heavier-than-usual workload took some adjusting on my part, but hopefully it will be worth it to finish things up a semester ahead of schedule.

But even with all the work that has gone into those endeavors I still have to admit that my failure to keep the blog updated is due less to busyness than to laziness. And so, not for the first time, I’m trying to jump-start and get things rolling again.

I think part of the problem is that I sort of lost focus. I had begun to drift into what can be a dangerous area for writers. I had started to think I needed to write about things people wanted to read.

If I’ve learned anything from my time in the blogosphere, it’s that writing to your perceived audience is almost always ultimately a dead-end road. It causes you to over-think and makes you hypercritical. And it rarely has the desired effect.

What experience tells me (and conversations with other writer friends bears this out), is that I’m at my best when I just write what I need to write, whether I believe anyone else wants to read it or not. The best I can do is invite you along for the ride and hope you find something that connects, that inspires, that breathes life into something you, too, may be wrestling with.

So that’s my goal. I hope my rants and rambles will find a place in your imagination and help you give voice to your own thoughts and dreams.

One thought on “Time to come clean…”